Sandblasting (or abrasive blasting as it’s more properly known) was invented in the late 19th century. The simple process of introducing abrasive into a stream of air and propelling it at high velocity onto a surface has grown with the advancement of technology. Equipment can be as basic or as specialized as desired.

One of the most important choices a contractor must make during the purchase of sandblasting equipment is the size of the blast pot, also know as a pressure vessel. Choosing the right blast pot is often dependent on the kind of work being undertaken, the amount of area being blasted, and the type of access into the work area (door size, stairs, etc). 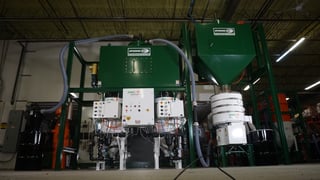 Larger blast pots give contractors more time blasting and less time refilling the pressure vessel with abrasive media. To provide an idea of scale, some shipyards have massive blast pots that contain enough media to allow for days of continuous blasting. These room-sized setups typically have multiple blast hose connections. Large blast pots offer some benefits for extensive projects, increasing production per hour. Stationary setups and integrated blasting systems are great at maximizing efficiency in single locations, as they offer no mobility.

In contrast mid-sized, more mobile blast pots can be the best choice where versatility is required. Although these smaller systems provide less blast time per fill, they can easily be moved from project to project. Further, staging can be customized to each job with smaller pots, allowing for changes in containment, or proximity to the blast area.

All abrasive blasting units require an air compressor. Size requirements vary based on nozzle size and blast pressure. For example, a Number Six nozzle at 8.3 bar (120 psi) requires a compressor capable of generating 220 CFM (6.23 m³/h) of air. Using a smaller than required air compressor will slow production and can also lower the surface profile imparted.

Contractors must also choose the type of abrasive media, which is often referred to generically as sand. There are several types of media, many of which have different properties, benefits and disadvantages. Some abrasive types present health risks, such as Coal Slag which contains beryllium and other heavy metals. OSHA has published a Fact Sheet illustrating toxic and non-toxic categories of abrasives. If dust generation is a concern, Sponge Media™ or other dust-suppressing abrasive blasting methods can be used.

Major changes have occurred over the last 50 years with regard to worker safety. In the past, Sandblasters and nearby workers failed to use PPE - most notably hearing protection and respiratory protection. These workers (many who were not blasters themselves) were exposed to a variety of health-concerning agents, especially silica, which causes silicosis. Worker exposure is affected not only by the content of the abrasive but also the substrate, coating, and surface contaminants being blasted. Concrete for example contains Silica and blasting it can release significant levels of respirable Silica if it’s not reduced through engineering controls.

The Occupational Safety and Health Administration’s (or OSHA’s) final rule on silica is an effort to help protect all workers including abrasive blasters who may come into contact with respirable crystalline silica. Sponge Media is listed in the OSHA Abrasive Blasting Fact Sheet as a “Less Toxic” abrasive and is the only media identified that can create a profile on steel.  It is also the only abrasive media with built-in engineering controls to suppress silica dust or other hazards released from the substrate.