Lighthouse Restoration 101: Why Sponge Media is a Great Choice

Lighthouses, once critical for safe international shipping and commerce have essentially been replaced with modern navigational tools such as radio beacons and GPS. Many lighthouses remain functional with working lanterns, used as a backup tool for mariners in instances where other navigational systems have failed.

These historical lighthouses tend to be beloved landmarks by their coastal communities, serving as a living memorial to an era in which these seaports thrived as hubs of trade. When accessible to visitors, lighthouses typically become highly photographed tourist destinations.

Lighthouses are usually constructed from tough materials like cast iron, steel, brick, and other masonry products that can stand up to harsh winds, surf, and the corrosive chlorides found in both. Due to the extreme conditions these specialized buildings must withstand, they must be periodically restored.

Many lighthouses were coated in lead based paint over the years. With this in mind, some lighthouse restoration projects have lead abatement components in addition to other needed rehabilitation. Contractors familiar with lead jobs will often take the steps to protect themselves by testing the lighthouse grounds for lead contamination prior to the start of abatement – thus avoiding liability for lead contamination that may already have been there from prior restoration work.

Peelers or other chemical paint removal methods do not require a compressor, but are often much slower than an abrasion based paint removal process. Multiple applications of peelers should be anticipated to fully remove layers of old coatings. While working near a coastline, the containment of chemical removal methods’ runoff is essential. 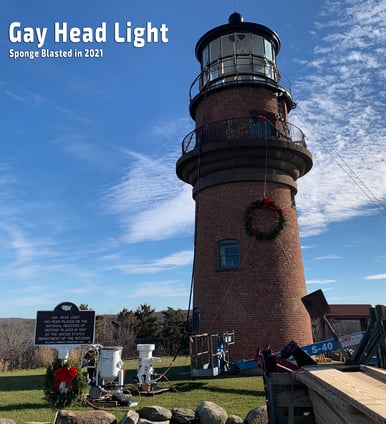 Dry abrasive blasting is usually a better option for coatings removal on lighthouses. Special care must be given that the media isn’t too aggressive for the surface. Jobsite staging can be a challenge with many ordinary abrasive blasting methods. The location of many lighthouses on islands, cliffs or other remote areas makes hauling literal tons of abrasive blasting media like garnet or coal slag impractical and cost prohibitive. Space for storage of these abrasives can be limited. If lead or other hazardous material is present, disposal costs can be high for contaminated blasting media.

For lighthouse projects that include coatings removal (including removal of lead-based paint) from both metal and masonry lighthouses, Sponge-Jet is a great choice. Sponge Media has been used on a number of lighthouse restorations spanning from both coasts of North America to the Netherlands.

Because of the recyclable nature of Sponge Media, substantially less blast material needs to be transported to and from the project site. Sponge Media creates much less waste than other blast media like garnet or coal slag, saving money on waste disposal and reducing the impact of waste entering landfills.

Many historical restoration professionals choose Sponge Media because of its ability to be delicate with sensitive historical surfaces such as stone. Sponge Media removes chlorides from surfaces while it cleans, which is key in the preservation of both stone and metal substrates.

On the Nubble Lighthouse, all of these benefits of Sponge Blasting came into play. The Light is located on a small island just over 100 feet from the Maine coast in Cape Neddick, USA. The tower is made of cast iron, so removal of chlorides and corrosion prevention was a top priority. The ability to only have a small amount of Sponge Media on the job site and recycle media as it was blasted helped alleviate the challenge of needing to transport abrasive back and forth to the small island. To see an overview of the project, view the video below...