Due to concrete’s versatility and cost compared to solid rock, most new building construction includes the use of concrete. Concrete is a technology as old as the Roman Empire, but has evolved to include finishes that can now be used in place of stone countertops or tile floors. When properly installed and maintained, concrete structures can last a very long time.

Concrete restoration is sometimes referred to as cement restoration. This term can be confusing to some who are not a part of the maintenance and restoration industry. Cement is actually a primary ingredient in concrete. Cement is typically mixed with sand, stone, and water before being applied to a steel skeleton for added stability. This mixture turns to concrete when it hardens.

If failures occur, concrete can crack and crumble creating eyesores and potential structural issues. Concrete failure can be attributed to a number of things including curing problems, excessive moisture, expansion and contraction of the concrete, and material stress. Concrete is high in compression strength but low in tensile strength, meaning it can fracture and crack easily if weight is not distributed evenly. Rebar (made from steel) is added to distribute stress throughout the concrete and greatly increase concrete member’s tensile strength.

In the years after installation, aging will occur, including environmental staining, discoloration, and concrete failure. Concrete restoration can be done on the outside of the surface, or down 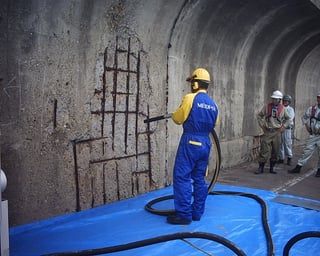 to the rebar. In some cases, the rebar will corrode inside the concrete, creating expansion. This leads to concrete weakening and eventually cracks along the expanding, rusty rebar. According to the Portland Cement Association (PCA), rebar corrosion is the leading cause of deterioration in concrete.

In an effort to halt further damage to concrete, exposed rebar and surrounding concrete can be blasted with Sponge Media™. Unlike ordinary abrasive blasting media, Sponge Media’s composite sponge matrix does not create small (micro) cracks when blasting concrete. If a contractor blasted concrete with coal slag or garnet, the repetitive impact would send vibrations through the surrounding structure, creating small cracks (also know as microfissures) throughout the surface. Once recoated, these newly created cracks would be the first to fail.

Common concrete restoration projects include cleaning the surface from environmental soiling and staining. Sometimes concrete structures will darken over time. This can be from a number of factors. Smoke and soot from cars and buses or from building’s heating systems can leave behind residue on concrete surfaces. Years of accumulation can be removed quickly with sponge blasting. This process is typically very fast. Sponge Media can clean concrete at a rate of 23 to 34m² /hour) (4 to 6ft²/min).

Unwanted graffiti can be very difficult to remove from concrete. Though concrete becomes as hard as a rock when it cures, its surface can be irregular and porous. When spray paint is applied, the paint seeps below the surface, sometimes as deep as 2 millimeters or more. Two of the most common methods to remove graffiti are: high viscosity chemical strippers and the other, abrasive blasting with ordinary abrasives. Both provide challenges. Chemical strippers typically do not penetrate the necessary depths of concrete to completely remove the paint, leaving discoloration and staining behind. Ordinary (non-Sponge Media) abrasives can cause significant damage to the surface before it completely removes the paint.

Sponge Abrasives like Sponge Media can be used to remove the paint, which has penetrated below the surface without causing damage to surrounding areas. Due to the nature of Sponge Media’s composite sponge, the impact to surrounding material is lessened. Regular media creates a constant concussive force against the concrete, creating microfissures. This is not the case with sponge abrasives. Further, using sponge abrasives, the blaster has enhanced visibility allowing for a better, more surgical blast.