Damage from corrosion is one of the largest threats to the safety and integrity of a ship. Without proper safeguards in the form of coatings, surface preparation, and cathodic protection, ships and boats of all sizes will eventually rust and deteriorate. While materials used to build ships vary, most types of metals corrode, especially in chloride-rich environments like sea water.

Wherever coatings fail, corrosion damage occurs. In most cases a ship can be repaired, especially if the damage is identified early enough. If corrosion has damaged the ship below the waterline, it may need to be moved to drydock. In drydock, water around the ship is drained, allowing repairs to be made in areas normally submerged in water. An alternative, less costly approach to dry-docking a ship needing smaller below waterline repairs is through the use of a cofferdam.

Abrasive Blasting Inside a Cofferdam

When abrasive blasting inside a cofferdam, it’s important to consider the type of abrasive being used, and also the materials used to make the cofferdam. Vinyl cofferdams, stretched over a metal frame require abrasive media with low rebound and/or low ricochet properties. Abrasives with high-rebound characteristics like steel grit can puncture some vinyl-made cofferdams causing the work area to flood.

Use of Cofferdams have added benefits for abrasive media that is going to be collected and recycled. A vacuum at the bottom of a cofferdam transports blasted media to a single point for reclamation.

Cofferdams used in the Repair of the Olympia 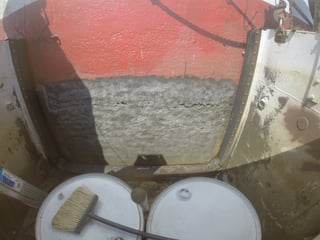 Cofferdams were recently used during the marine rehabilitation of the cruiser,Olympia, a decommissioned steel military ship launched in 1892. The Olympia, now residing at the Philadelphia Seaport Museum, is the oldest steel warship afloat in the world. The Olympia was in need of normal repair and maintenance work, but had additional issues below the waterline. Rather than move the ship to drydock, blasters worked inside a cofferdam, allowing the Olympia to remain in place and continuously open for tours.

Sponge-Jet was a perfect solution for the Olympia repairs. Blasters worked in close proximity to the ship's surface but remained safe from normally harmful ricochet associated with ordinary abrasives. Low rebound Sponge Media™ abrasives reduce the collision energy at substrate impact, drastically reducing media ricochet. The Olympia is moored in the Delaware River, so it was extremely important to contain all abrasive and debris created. Blasting with as little dust as possible was critical to the successful completion of the project. Sponge-Jet suppresses up to 99% of blast generated dust when compared to ordinary abrasive blast media. The process of Sponge-Jet dustless blasting was developed to entrap particles that would normally become airborne during the blasting process.

Our engineers and blasting specialists have seen the same inefficiencies in countless factories, shipyards, and naval facilities. The Marine Manager Checklist Series covers industry best practices of using compressed air. Click below to download “How to Use Compressed Air More Efficiently.”