The Restoration of the Milwaukee Federal Building and U.S. Courthouse

The Milwaukee Federal Building and U.S. Courthouse is one of the most recognizable buildings in the historic downtown district of Milwaukee, Wisconsin. Completed in 1899, the Richardsonian Romanesque structure was designated as a Milwaukee City Landmark in 1972 and listed in the National Register of Historic Places the following year.

Over the last hundred-plus years, the building has seen harsh Wisconsin winters, as well as a hydrofluoric acid cleaning in 1964 that changed the composition of the granite, compromising the integrity of the façade. In 2018, the U.S. General Services Administration commissioned Mills & Schnoering Architects to begin an extensive, two-year restoration of the building’s exterior. Mills & Schnoering turned to The Tradesman Group to clean and repair the façade and all carved ornamentations. Cleaning and Restoring the Crumbling Granite

When The Tradesman Group crew arrived on the scene, it was apparent that the 1964 hydrofluoric acid cleaning had done a great deal of damage to the façade.  A survey of the substrate condition noted cracking, water penetration, and softening of the granite. Crews used a sounding hammer to find underlying, concealed issues, and it was noted that in some areas, netting was put up to catch small pieces of falling stone.  “The acid changed the makeup of minerals on the granite surface, causing surface layers of altered mineral to flake. This resulted in a patchy, mottled appearance that was not consistent with the original appearance of the stone,” said Rick Freitag of The Tradesman Group.

According to Frietag, it was imperative that the cleaning method chosen be aggressive enough to remove the altered mineral crust, but also gentle enough to maintain the integrity of the underlying granite substrate.  “We chose Sponge-Jet’s Sponge Media because of its ability to effectively remove the altered mineral crust without causing damage to the stone substrate below,” stated Freitag.  Sponge-Jet’s Silver 60 and Silver 80 Sponge Media products were used for gentle, yet effective micro-abrasion cleaning of 92,000-square-feet of the North building façade, including the tower elevations.

Since court was in session and the building was fully occupied for the duration of the restoration project, all Sponge Media cleaning had to be done at night. According to Freitag, this work restriction was by far the most challenging to manage. “Working at night was very difficult for several reasons. Less available light always creates less than optimal working conditions. Managing work operations at different hours than normal business hours also places extra stress on the project team and places a narrow overlap for coordination between the site operation and the management office. Deliveries and repairs to equipment are also not convenient during after hour operations,” explained Freitag.

In addition, there was also another factor to consider during the Sponge Media cleaning process…noise.  The building is adjacent to other historic buildings, including the exclusive Milwaukee Club and the 4-star Pfister Hotel.  The crew placed noise attenuation blankets on the perimeter of the scaffold surrounding the work zone each night. “These heavy, insulated blankets kept the sound transmission from the Sponge-Jet equipment within our work zone,” said Freitag. 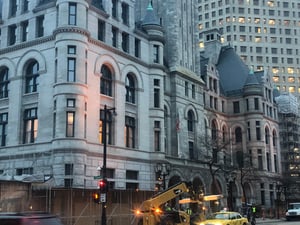 Luckily for the team, working with Sponge Media has many advantages that allow for smoother workflow and flexibility of schedule than other cleaning methods. “Sponge media blasting is a dry versus a wet blasting process. This dry blast method allowed for immediate review of cleaned areas to see if a second pass was needed to achieve the desired results.  In other words, there was no requirement to wait for areas to dry out before review,” said Freitag. While this is an advantage on any job, it was invaluable on a nightshift-only job, as the crew didn’t have to wait until the following night to make any repairs or touch-ups.  In addition, Sponge Media blasting is much easier to clean up on a daily basis than wet blast methods, saving the crew valuable time and effort nightly.

The Sponge Media cleaning method also allowed for operations to proceed in cold temperatures.  Although the majority of the cleaning process was to occur during the warmer months, a delay at the beginning of the project meant that crew was starting the job farther into the fall season than they had planned.  “With Sponge Media cleaning, we were able continue through colder weather than with a wet blast method. We didn’t have to worry about freeze and thaw cycles. This allowed for greater flexibility in scheduling and allowed us to go later into fall and winter with the cleaning process,” said Freitag.