Taking a Closer Look at Magnification

Many in the abrasive blasting industry rely on unaided visual assessments for their information. Tasks like identifying the level of cleanliness of a surface as Sa2.5 (NACE 2 or SP-10) during an inspection are required to be done with the naked eye by the included language, “when viewed without magnification". This is sometimes referred to as an “unaided view.” Often, an unaided view can be deceiving.

While there are several ways to remove old paint and debris while preparing a surface for coating, they all must conform to the specification required by the facility or asset owner. Specifications will frequently require that the metal portions of the asset be cleaned to a standard such as “white metal blast cleaning” or “brush off blast cleaning.” Many of the surface preparation standard organizations (NACE, SSPC, etc.) all use an “unaided view” caveat as part of their standard for surface cleanliness. This means that no magnification may be used to determine if a surface has reached a “white metal blast cleaning” state.

This “unaided view” measure is added for multiple reasons, one being the difficulty in distinguishing rusty dust left by profiling abrasives and rust that is still a part of the surface. Regular profiling abrasives like coal slag, garnet, and sand frequently leave behind pulverized, microscopic rust particles on the surface. Typically after blasting has taken place, a blaster will blowdown the surface to remove loose particles resting on the surface. Unfortunately, loose, oxidized metallic particles can still rest in the newly created surface profile’s nooks and crannies. Since all wet applied coatings are permeable membranes, water will eventually penetrate to these corrosion cells creating pockets, and leading to coatings failure.

Abrasive embedment is another factor to consider. When blasting a surface, abrasives can become stuck in the metal surface. This embedment traps the old coating and corrosion between the blasted metal and the new coating when it is applied. Magnification can help show the rate of embedment on a basted surface. Some abrasives like coal slag contain particles that can induce corrosion and coatings blistering. 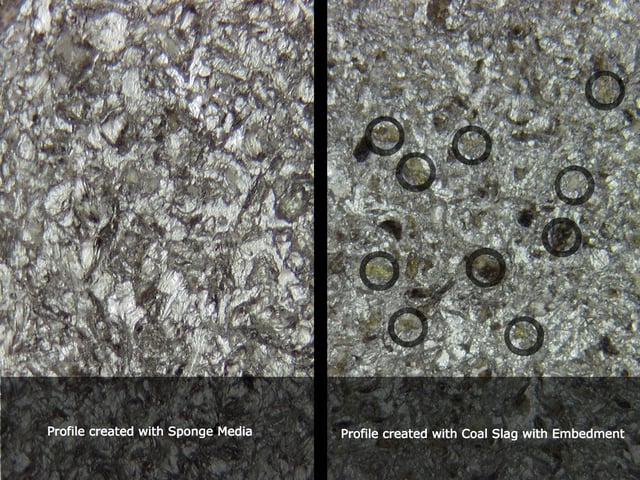 Further, under magnification, profiles can be found to be much less uniform than they appear to the naked eye. Gouges and other surface roughness imperfections made by hand tooling and steel grit become exposed under magnification. Ideally a metallic surface cleaned with profiling abrasives should have peaks and valleys of very similar height and depth across the whole surface, allowing for even application of coatings. 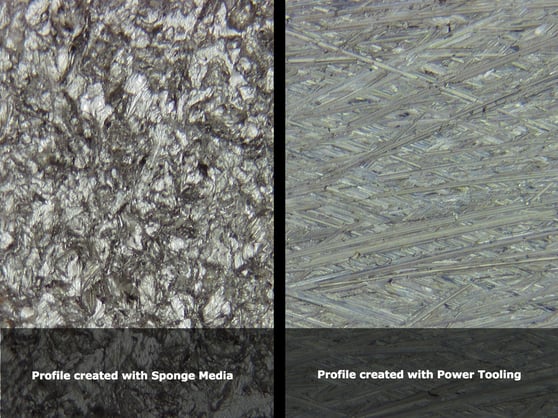 Some of these “unaided view” issues are starting to be considered by coatings specifiers. Some project spec writers will note in their specification that the surface is to be analyzed during inspection using magnification aids to ensure cleanliness and profile consistency.

When testing a newly cleaned surface per the ASTM E1216 - 11(2016) Standard Practice for Sampling for Particulate Contamination by Tape Lift, metal blasted and profiled with Sponge-Jet tends to be free of more small dust and particulate than any other dry abrasive blasting method. Additionally chloride detection tests consistently show that Sponge Media abrasives produce a cleaner surface from both visible and invisible contaminants.

By analyzing a surface with magnification, little doubt is left on the cleanliness of the surface. A clean surface ensures a better, longer coating life, and the best possible coatings performance.