Often when historic buildings are restored and renovated to serve modern purposes, unforeseen challenges quickly arise. In the case of the renovation and repurposing of the Old Altoona Silk Mill (circa 1889), the challenge took the form of lead abatement throughout the entire building and across three different substrates - wood, brick, and steel.

Given the age and history of the old silk mill, it wasn’t a surprise that lead paint existed within the building; however, the sheer volume of lead presented quite a logistical, environmental, and economical challenge. The building is four stories (three main floors plus a basement level), and there are three substrates within the structure – Southern Golden Pine wood beams and trusses, steel columns, and brick interior walls. 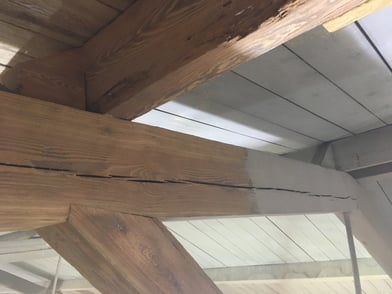 At first, the contractor, Environmental Hazard Controls (EHC) considered several different leadremoval/surface preparation methods, but each one came with its own set of issues. For the wood, a lead-lock coating system was considered, as the building management was hesitant to strip or blast the original wood beams and trusses. This “over-coating” is a costly process that encapsulates the existing lead paint, but does not remove it.

As for the brick walls, chemical stripping was considered as an option for the lead abatement process. However, chemical stripping often requires multiple applications, as well as cleaning after the final pass. It is also not completely effective in removing lead paint from cracks, crevices, and imperfections. In addition, the results of the chemical stripping process vary quite dramatically based on the temperature change when weather is cold.

Ultimately, it simply made the most sense to use Silver 60 Sponge Media™ on all three substrates within the mill. It quickly and completely removed the paint from the wood beams and trusses, but didn’t damage the substrate and kept the integrity of the original wood intact. Sponge blasting also cost significantly less than it would have to prepare the wood substrate and apply the lead-lock coating, estimated at a cost of an additional $80,000.

Sponge Media blasting was equally as productive as traditional grit on the steel columns and the brick walls, but much easier to contain and clean-up, and produced little to no dust during the blasting process. Sponge Media removed the lead coating from the brick in a single pass, was not sensitive to ambient temperature, and no subsequent washing was required. The Sponge-Jet Regional Manager on the job mentioned, “rather than sealing in the liability [on the wood], the contractor completely removed it.”

Overall, by using Sponge Media on this project, significantly less abrasives were consumed lowering the cost of hazardous disposal 92-94%.

The use of Sponge Media to remove the lead paint from the Mill at Altoona was cost-effective, efficient, and safe for both the blasters and the environment and helped to preserve a part of history in a modern, mixed use commercial space.