Unexpected jobsite findings when combined with an extremely tight deadline adds a challenging layer to projects that some contractors can’t overcome. This was not the case with Corrosion Control Resources, Inc. (CCR) who arrived on the scene at Arlington Water Utilities Pump Station expecting to hand blast with coal slag, but ended up robotic blasting with Sponge Media.

The scope of work included removal of the existing internal lining of a 60 inch (1.5 m) raw water line. Once the liner was removed, the crew was tasked with relining the pipe. Limits of the liner removal and relining were defined as inside the pump station to outside the pump station where the aerial (aboveground) pipe transitioned below grade. According to Drew Johnson of CCR, the crew was under a great deal of pressure. Drew explained, “The pump station and pipe are a crucial part of the water supply system for Arlington, so we needed to get everything back in service by a certain date. There was no room for error.”

When Johnson and crew were ready to begin removal of the coal tar epoxy lining on the pipe’s interior, 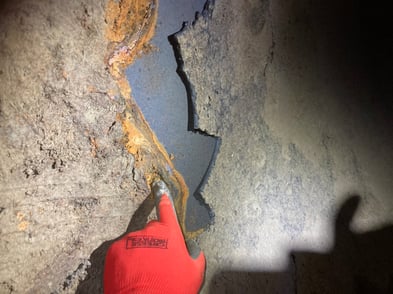 Conventional Abrasives: Too Much Waste, Too Much Time

The discovery of coal tar enamel coating was a huge road-block for the CCR crew. “Coal tar enamel is a very thick lining that has been phased out over the last couple decades. To give you an idea of the difference between epoxy and enamel: Coal tar epoxy is typically anywhere from 8-15 mils [200-400 microns] thick. Coal tar enamel is 10 times that thick. We were looking at having to remove a lot more material using hand blasting with coal slag abrasive. I knew immediately this wasn’t going to work, and my very next thought was of Sponge-Jet’s Sponge Media,” said Johnson.

To prove that ordinary grit was not the right choice given the newly discovered coal tar enamel lining, Johnson and crew performed a test blast using ordinary blasting equipment and coal slag abrasive on a section of the pipe. Results of the test blast showed that 100 lbs (45 kg) of media removed just under 1 ft² (0.1 m²) of coal tar enamel. Given the surface area of 3,500 ft² (325 m²), the total media required with minimal waste would be 350,000 lb (160,000 kg). “That’s about 21-22 semi-trucks filled with abrasive media,” stated Johnson. In addition, the estimated timeframe was 20 weeks – a schedule that was unacceptable to Arlington Water Utilities.

At this point, Johnson and crew knew that Sponge Media, along with robotic abrasive blasting could save the job and keep CCR on track. “After speaking with Sponge-Jet’s pipeline technical expert, a site visit was arranged. Sponge-Jet had several other past projects removing coal tar enamel and provided an estimated time and media requirement for removal using Sponge-Jet media and equipment,” said Johnson.

When it came to the speed of coal tar enamel removal, Johnson stated it varied based on the thickness of the coal tar enamel. “The robot speed varied, but we ran most of the time at 2.2 in (6 cm) per minute. With the 60-in diameter pipe, that equates to 2.87 ft² [.25m²] per minute. To compare, it took 2 minutes, 32 second to remove under 1 ft² (.1m²) of liner when hand-blasting with coal slag. Even if you account for the robot having two nozzles, it is still safe to say that using Sponge Media and Robotica was approximately 3-4 times as fast as conventional hand blasting,” explained Johnson.

In addition to saving time and money, the Robotica system provided a safer way to remove the coal tar enamel lining from the interior of the pipe. “We didn’t have to worry at all about confined space entry. The robot was operated from a pendant, that allowed us to remotely adjust drive speed, direction and blast arm rotation,” said Johnson. However, because of the hazardous nature of the existing lining, the team wore special Tychem® suits, extra heavy chemical gloves and utilized protective breathing gear when in any type of contact with the coal tar enamel.

A Success That Was Right on Schedule

The 5-man CCR crew spent three weeks on the lining removal portion of the job. “We were under so much pressure to get the pump station and pipe back into service that when we discovered the coal tar enamel, we knew that we had to pivot and come up with another solution for the lining removal. Sponge Media and Robotica saved time and money, created much less waste and provided a safer option than ordinary abrasive blasting,” said Johnson.