Restoring Engine 19 to a Well-Oiled Machine

Sponge-Jet is pleased to have been used as the method of choice for the restoration of the 1906 Baldwin Locomotive Works’ Steam Engine 19. Engine 19 has a notable history including being the only engine manned by an all African-American crew in the Carolinas. Through much of its service life, Engine 19 would transport blue granite and crushed stone throughout the region. The steam engine was first acquired by The Railroad Historical Center, located in Greenwood, SC, in 1970. With recent funding support, its preservation became a priority to the museum.

Both the interior and exterior of the Number 19 Steam Engine have been fully restored to their original glory. The first step in the restoration process included removal of over a century of accumulated rust, grime, and lead-based coatings.

The project was led by Mike Coleman and his preservation team at Contaminant Control, Inc. The team used Silver 16 Sponge Media™, Silver 60 Sponge Media™, and Silver 320 Sponge Media™ abrasives to remove residual corrosion and layers of lead-based paint from nearly 2,800m² (30,000ft²) of the locomotive’s surfaces. The process was productive and results were spectacular. Contaminant Control was able to safety remove the lead-based paint that covered the Number 19 Steam Engine while controlling harmful lead-based fugitive emissions.

While restoring the Number 19 Steam Engine and it’s six accompanying rail cars, Contaminant Control, Inc. had to achieve both an SSPC-SP10 (near-white metal blast cleaned surface) and SSPC-SP6 (a commercial blast cleaned surface) levels of cleanliness, while reaching both 50 and 100micron (2 and 4mil) profiles on the different surfaces. The project was particularly challenging due to the wide range of substrates, which included steel and decorative metals.

One of the main reasons Sponge-Jet was selected for the Railroad Historical Center project was Sponge Media’s ability to create a dustless blasting effect, while retaining the benefits of abrasive blasting - speed and ability to create a profile. Sponge Media encapsulates dust generated on impact with the surface, limiting airborne contaminants associated with ordinary abrasive. Without Sponge-Jet’s dust limiting Sponge Media, abrasive blasting would not have been possible due to the presence of Lead in the engine’s original coating.

Mr. Coleman on selecting Sponge-Jet for this restoration said, "Prior to this project starting, CCI conducted spot tests using Sponge-Jet, Dry Ice Blasting and Farrow Blasting. A variety of substrates were shot and each blasting media gave different results. The Sponge-Jet product was consistent across all substrates and gave the correct surface profile by changing the media for each substrate. The Sponge-Jet product was also preferred due to its dry nature eliminating excessive moisture and the chance of potential mold growth. The recycling capabilities and the cost of Sponge Media allowed the project to stay well within budget."

Before starting a lead project, make sure you have your bases covered. Review Sponge-Jet's Deleading and Lead Abatement Industry CYA Checklist below: 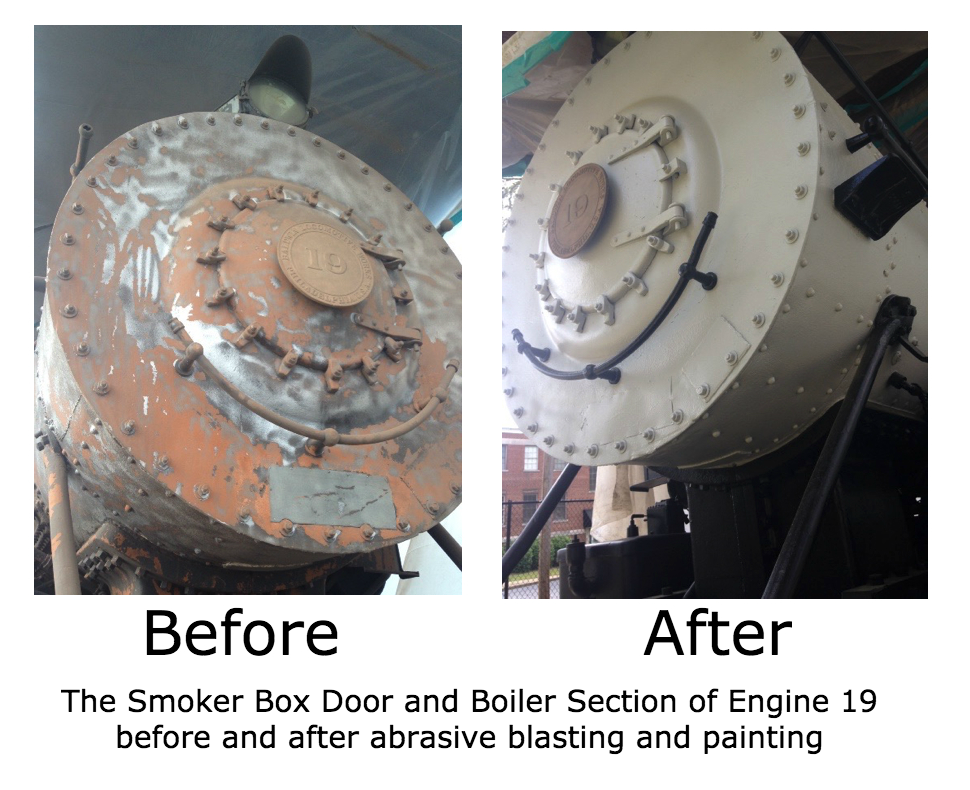