Lead paint removal is a challenge regardless of location and circumstances, but even more so when the process takes place in a busy train station. This was the case when Avalotis Corporation was tasked with a lead paint removal, surface preparation, and high-performance coating system application at the 30th Street train station in Philadelphia, PA. The train station, built in 1933, is on the National Register of Historic Places and is  the tenth busiest in the United States.

While working on the 30th Street project, containment and reduced dust generation were a must as the Avalotis crew tackled the lead paint removal and surface prep on the 132 curtain wall panels and light court windows. Avalotis Corporation turned to Sponge Media abrasive blasting for the lowest dust exposure possible during the two-year, 275,000ft² (25,550 m²) job.

When the Avalotis blast crew arrived at the station to begin work, they first installed “Class 1” containment on access scaffolding. Containment fully surrounded the blasting process and coating system application. The use of Sponge Media blasting versus ordinary abrasive blasting offered much lower dust exposure within the containment, a big plus for safety and convenience of the crew. 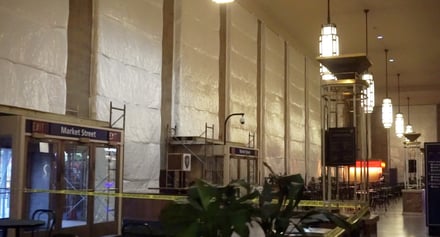 In addition to lead paint abatement on the cast iron windows, the abrasive needed to impart a surface profile that would lend itself to the proper adhesion of the new coating system. The Avalotis crew used Silver 80 Sponge Media to achieve the SP 10 (Sa 2.5 / NACE 2), Near White Blast Cleaning specification

Throughout the blasting process, crew members PPE included air-supplied blast hoods, coveralls and blast gloves. The safety of the crew and of all in the vicinity of the blast area was the top-priority for Avalotis Corporation.

Many other trades were working at 30th Street Station during the Sponge Media blasting process, including carpenters, masons, laborers and iron workers. Fortunately, coordination between trades and a great deal of logistical planning kept blasting on schedule and did not impact the Avalotis crew.

The team was faced with several challenges however, while on the job. The workspaces were small and tight, and the crew had to be extremely diligent about keeping media and lead dust from entering the building and office areas. A checklist had been developed prior to the erection of containment to ensure that there was no exposure inside or outside of the building. Once all items on the checklist were performed, the specific area of containment was inspected and verified prior to the abrasive blasting process.

The use of Sponge Media was a huge help in minimizing the risk of fugitive emissions and lead exposure. In addition, blowdown and clean up were much easier to contain because Sponge Media was used instead of ordinary abrasive media.