Time is of the essence for any public bridge project. Missing deadlines can be costly to bridge owners, operators and contractors, and ultimately to those who rely on them for daily transportation. For example, 118,600 cars and mass-transit passengers rely on timely passage from Cambridge to Boston, MA (USA) each week over the historic Longfellow Bridge. In the summer of 2013, the clock started on a $255 million project to replace structural elements and restore the bridge’s historical character.

The granite restoration portion of the Longfellow Bridge project in Boston, MA is nearing completion. Sponge Media™ micro-abrasives were chosen by United Stone and Site, Inc., the contractor that won the bid to clean the large blocks. The large scale granite restoration project included onsite blasting, as well as dismantling of the bridge’s iconic Rockport granite “salt and pepper” towers piece-by-piece, and then transport them to nearby work yards in Charlestown via barge.

Once the tower's slabs reached the work yard, they were blast-cleaned with Silver 80 Sponge Media to 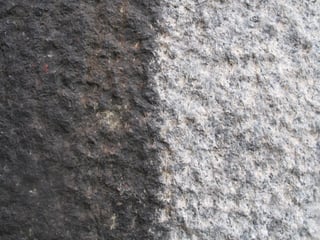 remove graffiti, dirt, efflorescence, and environmental contaminants that accumulated in the 110 years since their original installation. This video shows the return of the stone’s original finish during the project’s first phase. The Longfellow Bridge did undergo a smaller restoration in 1959, but the scale of the current restoration is much larger.

United Stone and Site was able to achieve the desired cleanliness/finish of the granite while maintaining production speeds of 27m²/hr (5ft²/min). Sustaining the cleaning rate was critical to returning the massive blocks for installation on time, and was achievable with one blaster.

Sponge-Jet was chosen as the method of restoration for a number of reasons. United Stone and Site’s work yard in residential Charlestown, MA is on the Charles River - ideal for transporting large granite blocks by barge, but poses a great challenge for containing dust and runoff. Containing run-off and added leachates associated with wet processes like acid-washing and chemical-stripping would not be possible in such a close proximity to the river bank. Containing and recycling the dry sponge abrasive after multiple uses was also a major cost-saving benefit. By using Sponge Media, United Stone and Site estimates they have saved nearly 30% of the cost of traditional wet-abrasive and chemical restoration methods.

Jeff Hartwell, VP, Operations for United Stone and Site Inc. said, “The Sponge-Jet system has worked great for us on the Longfellow Bridge and other projects. Once initial setup is in place, the system can do its job with a two-man crew depending on access. You can’t say enough about the eco-friendly aspect of the Sponge Media. All in all you would have to force us to go back to acidic cleaners or conventional bucket and brush-cleaning.”

For more information on the Longfellow Bridge Project, see these articles below:

Mass DOT About this Project - The Longfellow Bridge

Boston Globe - Contractors take Longfellow Bridge to the Past