In February 2019, work began on the decommissioning of the Battery Street Tunnel in Seattle, Washington. Expected to be completed in 2020, this project is a huge undertaking that includes removing the tunnel’s utility and mechanical systems, removing decades of automotive soot buildup from the tunnel, filling the tunnel, and sealing its entrances. 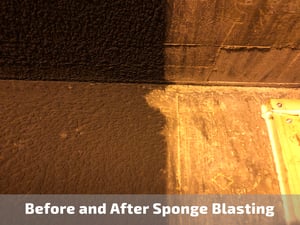 the ceiling of the tunnel. The build-up of carbon exhaust included lead deposits, so the job was considered a lead abatement project.

Sponge-Jet was chosen as the method of removal for the carbon soot. The primary rational being that the sponge blasting process is an environmentally friendly and low dust alternative to other abrasive blasting or sand blasting methods. By using recyclable Sponge Media, Crystal Soda Blast was able to drastically limit the amount of contaminated abrasives introduced to landfills.

According to Cordes, because of the air exchanges, the entire tunnel could not be contained in one section. “In all, there were six containment sections (three per tunnel). So, each tunnel had approximately 2,400 lineal feet (730 meters) of containment,” said Cordes.

In addition to the sponge media blasting team, other trades were working in the tunnel in preparation for its decommissioning. Although, the Crystal Soda Blast crew was the only team working within the containment sections, other workers could be nearby blasting with limited risk.

Overall, using Sponge-Jet Sponge Media for the removal of the carbon soot on the ceiling of the Battery Street Tunnel was the right choice for this project.

​“The result was something that everyone was happy with, and using sponge media was a safe and environmentally responsible alternative to traditional abrasive blasting, especially with the existence of lead deposits,” said Cordes.