B. C. Tilghman: The Father of Sandblasting and Abrasive Nozzles

The process of sandblasting as we know it today started around 1870 with a man named Benjamin Chew Tilghman, who observed abrasive wear on wind-blown desert windows. Tilghman also noticed the effect that high-velocity sand could have on hard material and began designing a machine that could propel sand at speeds much faster than the wind - and could concentrate this flow into a small stream. A nozzle mounted onto a moving platform could be used to guide the nozzle across the substrate. 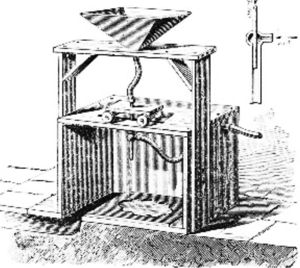 Pressurized air was supplied through the nozzle to give sand the velocity required for productive blasting. This was the first sandblasting machine, and the first use of what is called a straight bore nozzle.

The Birth of the Venturi Nozzle

Despite the Venturi nozzle not appearing in sandblasting until the 1950s, the Venturi effect was in existence long before. The scientific basis for the venturi design started with the work of Swiss mathematician and physicist Daniel Bernoulli, who discovered that a reduction in pressure of a fluid resulted in an increase in the fluid’s velocity. He published this discovery in his book Hydrodynamica in 1738, and it became known as Bernoulli’s Principle. Later in the 1700s, this work was supplemented with a complementary theory from Italian physicist Giovanni Battista Venturi. Venturi is credited with the discovery of the reduction in fluid pressure that occurs when a fluid flows through a constricted section of a pipe. This became known as the Venturi Effect.  Through the years, as abrasive blasting matured there were two different methods to deliver the abrasive in air: Suction systems and Pressure systems. The simplest is the Suction System which uses a venturi to create a suction at the nozzle and draw abrasive up a tube into the air stream.  These suction systems are still widely used today in small blast cabinets and simple low production blast tools. The second system, known as the pressure blast system is used in the majority of high production systems and achieves much higher particle velocity and productivity.

In 1888, Swedish inventor Gustaf de Laval developed a new nozzle shape for use in steam turbines called the de Laval Nozzle, or convergent-divergent nozzle. This nozzle was essentially a tube with a pinched section in the middle, making an asymmetrical hourglass shape. The primary use of this nozzle is to accelerate pressurized gas to supersonic speeds through the conversion of heat into kinetic energy. Originally, this nozzle was created to accelerate hot gas flows on the inside of a steam turbine. This nozzle shape was adopted for use in abrasive blasting nozzles during the mid-1950s and is the basis for the shape of many modern nozzles. Throughout the late 19th Century, minor modifications and adaptations were made with the hope to create different blast patterns or curved nozzles to blast into restricted spaces. (Bazooka Nozzles, Banana Nozzles, Fan nozzles).

TECH NOTE:  It should be noted that the abrasive blasting industry refers incorrectly to these Laval nozzles (those used on pressure blasting systems) as Venturi nozzles. Technically, Venturi is only the correct name for suction nozzles but its name has been uniformly adopted by the blasting industry for wherever Laval nozzles are used. We continue with this industry convention throughout our blogs.

For about 40 years after the Venturi nozzle was applied to abrasive blasting, nothing significantly changed about its design or operation. Manufacturers attempted new designs to use air supply more efficiently, but no serious scientific study had been conducted. In 1996, at the Penn State Gas Dynamics Lab, researchers began to investigate how nozzle design could affect abrasive blasting media efficiently. The researchers looked at how nozzles accelerate abrasive velocity and found that abrasives within the stream are pulled by faster-moving air. Because the air surrounding the abrasive particles is always faster than the abrasive itself–at least within the boundary of the nozzle–the abrasive is always accelerating. To make the most of this acceleration, the force of the air acting on the abrasive (a.k.a. drag) must be maximized throughout the nozzle. The researchers found that the highest drag force was achieved when the velocity of air was Mach 1.4 higher than the velocity of the abrasive. Penn State idated on a nozzle design to keep this Mach 1.4 air-to-abrasive relationship starting at the end of the nozzle throat and continuing all the way to the nozzle exit, maintaining maximum abrasive acceleration as long as possible. This theorized "ideal" nozzle was longer than standard nozzles and provided the air more time to expand in the divergent part of the nozzle. The result of this is a blast nozzle (which maximized abrasive velocity) creating 20% higher speeds and 44% higher impact energy than ordinary nozzles – with no change in air pressure, volume or abrasive used. The Penn State nozzle design was later commercialized under the SaberBlast™ Nozzle brand and represents one of the biggest productivity improvements in blast nozzles in a half of a century.